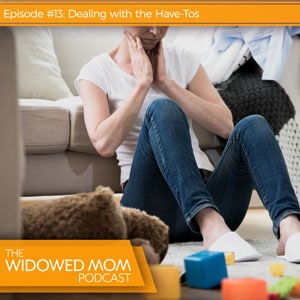 It’s easy to feel weighed down with all of the things we tell ourselves we have to do: clean the house. Take care of the kids. Lose weight. Start dating again. Clear out our husband’s closet. The list of things we “should” do could go on forever.

But today I want to let you in on a secret: you don’t have to do anything. You can choose whether or not you take care of the kids, or pick up the house, or give away some of your husband’s things. Switching your mindset from “I have to” to “I choose to” will take the pressure off and give you room to breathe.

This week we’re discussing the “have-tos” and pressure that we pile on ourselves and why it doesn’t have to be this way. We’ll talk about why we disempower ourselves when we tell ourselves we “have to” do things and how to coach ourselves out of this mindset. I’ll also share some client stories with you about choosing to do things rather than feeling obligated to do them, and why this can be such a positive mental shift.

If you like what you’re hearing so far and you think others would benefit from The Widowed Mom Podcast, it would be amazing if you’d take a couple of minutes to rate and review it in Apple Podcasts (or anywhere else you listen to your podcasts!). Click here to learn how to enter for your chance to win one of five $100 Amazon gift cards that I will be giving away in celebration of the launch of The Widowed Mom Podcast!

Welcome to The Widowed Mom Podcast, episode 13, Dealing with the Have-Tos.

Welcome to The Widowed Mom Podcast, the only podcast that offers a proven process to help you work through your grief to grow, evolve, and create a future you can actually look forward to. Here’s your host, certified life coach, grief expert, widow, and mom, Krista St-Germain.

Hey everybody, welcome to another episode of the podcast. I am recording this on a Sunday morning. Actually, gosh, it’s Sunday afternoon. I’m looking at the time. I don’t even know what happened to the morning. But coming up in just about a half an hour, I’ve got a group of people – my Heather’s Camp board – coming over to my house. We’re going to have our wrap up meeting. But I wanted to get this episode recorded and ready for you today.

So, let’s get into it. And I’m still running that competition where I’m giving away five $100 Amazon gift certificates. I’ve already given away two, and on today’s episode, I want to give away number three. So, Miss Angela Clarke, you are the winner of a $100 gift card to Amazon.

Angela submitted the following review. It was titled My Cheerleader. And it reads, “I’m so happy to have found Krista’s group on Facebook. The support and information shared is a refuge when few people truly understand the new reality my children and I now face. I’m living the new podcasts. They are the perfect length and the information timely, and at the end, when she signs off by saying I love you and you’ve got this, I feel like she’s cheering me on and giving me the boost I need to push through the week. Thank you for all you do.”

Thank you, Angela. And to those of you who maybe didn’t know I have a Facebook group, I do. It’s a free Facebook group. It’s called Mom Goes On, and the only requirements are that you are a widowed mom. Everybody in there is so loving and kind. So if you are not already in the group and you think you would benefit, come on over and just request access and we’ll get you in. It’s called Mom Goes On. Alright, Angela, that gift card is going to be heading your way very soon.

Some of you are telling yourselves you have to figure out how to find love again, you have to be okay. And the have tos are so not helpful. I wonder if, when I read that list, you noticed that you started to feel a little powerless, or maybe frustrated or trapped or obligated.

We tell ourselves we have to do something because we believe that it’s true, but then because we’ve created now a feeling of obligation and frustration and powerlessness, we aren’t feeling the emotions that actually help us do the thing. Instead, we’re inclined to rebel against it and then we don’t do the things that, in reality, we don’t have to do.

We don’t have to do anything. So let’s be honest. Now, do we want to do those things? Most of us do want to do those things.  Consider how different it feels to tell yourself you have to take care of your kids versus you choose to take care of your kids. It’s completely different. Anytime have to is in our vocabulary, it creates obligation, and that leads to resentment.

When we don’t want to do the thing we’re telling ourselves we have to do, when we do the thing, we’re doing it in a resentful way. We’re not enjoying any of it and we’re feeling very powerless and obligated and trapped and none of it serves us. None of it is any fun. And none of it is true.

We don’t actually have to do anything. It seems like this has been coming up a lot for some of my clients lately. I’m always thinking about my clients and what they need and what they’re struggling with. And it just seems like I’ve been coaching on this a lot.

I have one client – I want to tell you some of these stories not because there’s anything wrong with my clients but because it’s so relatable, because I know if they’re struggling with it, if I’ve struggled with it, then the chances are you’re struggling with it too, or you can at least apply it, even if it doesn’t feel like a struggle that you’re experiencing.

Sometimes I think we think that pressure is helpful, but it’s actually really not. So she didn’t have to order any checks. Secondly though, if she chose to order checks, she didn’t have to just put her name on the check. If she wanted to order checks, she could put his name on the check too, unless her bank didn’t agree, but so far, her bank had been continuing to take checks with his name on it, what’s the difference?

And she felt such peace and freedom knowing that there was nothing related to the checks or his name that she had to do. It was really all just a matter of what she chose to do. And the same action when it comes from choice, when we decide it’s our option, will feel completely different.

I remember my coach and mentor Brooke Castillo telling the story about the day where she realized – she was at the park and she has two little boys, they’re very close in age, and she was feeling very overwhelmed and not really enjoying being a mom of little boys at that moment in time. And she just really realized, she could walk away. S he could walk away from the park. She could just leave them there. That was what she could do.

And embracing that that was an option, even though it’s never what she would do, embracing that as an option put her back in the driver’s seat because, in recognizing that she was choosing to be the mother of those little boys, even when it was difficult and that she didn’t really have to do that, then she felt so much more in control, so much more powerful in her own life.

I have another client right now that her parents are aging and they aren’t in the best of health and she’s been in the hospital a lot with them. And of course, as aging parents sometimes do, hers aren’t particularly interested in following doctors’ orders.

And so when they don’t follow doctors’ orders and they end up making their physical issues worse, then she ends up taking her time to take care of them. And of course, she’s also trying to juggle being a mom, still getting through her grieving and adjusting to her new life without her husband and feeling angry with her parents because she’s telling herself she has to take care of them, that when things don’t go as planned with their health, that it falls on her, that’s he has to be the one to deal with it.

But it really isn’t true because she could just walk away. Think about all the people you know who don’t take good care of their parents, who don’t help, who don’t tell themselves that they have to. Now, is that the way that you want to show up in the world? I’m guessing not. I know it’s not for her.

And we get stuck in this conflict where we’re thinking, “I’m not ready,” but then telling ourselves we have to do something. Of course, that kind of conflict is going to result in our feeling miserable and conflicted. So who’s to say we have to deal with any of his belongings or we have to get rid of them?

They can stay there until eternity. We don’t have to do any of it. And when we want to do something with it, we can. But telling ourselves we have to while simultaneously thinking we don’t want to makes us feel awful. I don’t want that for you.

I know they feel believable, but they aren’t. I want to offer to you that you will experience things in such a different way when you decide that there’s nothing in this world that you have to do. There’s only choices.

And then probably you’re going to judge yourself for not being able to do the thing or for not doing it as well as you think you should, then it’s just unnecessary misery. So, decide instead that at every moment, you’re choosing what to do, that it’s all a choice, that no one in the world can make you do anything, there’s nothing you have to do. There are only choices that you, as the author of your life, get to make.

Okay, alright, I love you. I want you to remember that you’ve got this, no matter what it is you’re going through, okay? I’ll see you all next week. Have a great week, love you.

Thank you for listening to this week’s episode of The Widowed Mom Podcast. If you like what you’ve heard and want to learn more, head over to coachingwithkrista.com.